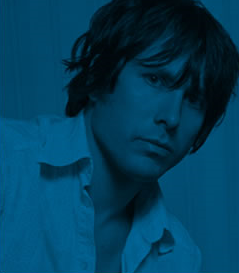 One of the people behind Kingdom Hospital Theme Worry About You.

SKSM: Could you start with telling me a bit about Ivy? Who is Ivy and what does Ivy do?

IVY(Andy Chase): We formed in 1993 as an indie pop trio, based out of NYC. We started on tiny record label called SEED, then moved around to a bunch of majors like Atlantic and Sony. We’re currently signed to Nettwerk Records. Our singer Dominique is French, I’m from Washington, DC and Adam is from New Jersey. In the studio me and Adam play all the instruments and the three of us produce the albums. Live we add another guitar player (besides myself), a drummer, and a keyboardist so that we’re a six-piece when we tour.

SKSM: When did Ivy make Worry About You? Can you tell me a little about the production? How much did it cost? How long did it take to make it?

IVY(Andy Chase): That song was written for our album Long Distance in 1999. It started as a simple, almost nursery rhyme on the acoustic guitar. We wanted to keep the song minimal and somewhat “spooky”, never expecting of course what else it was destined for! Adam initially put the acoustic guitar part down to a click track. I added the Wurlitzer Piano and then we found a drum loop we really liked from my loop library. Dominique was very pregnant when she sang this and her voice was very low and husky as a result. She had to take many breaks because she kept getting out of breath. It was very hard for her, but I love the way her voice sounded. I’m trying to keep her pregnant every time we make a record now! Anyway, all said, it took about 2 or 3 days to feel like we were totally finished with it. We recorded it, as well as the rest of the album, in our own studio so it’s hard to say how much it really cost.

SKSM: “Worry about you” seems to be written for someone. Is that true, and if so, for who is it?

IVY(Andy Chase): We don’t like to be too literal in Ivy. We prefer to hint at things and make subtle innuendoes. Songs like this are an amalgamation of a few different tales from our past.

SKSM: How did you react when you found out that your song was going to be used in a Stephen King series?

IVY(Andy Chase): Very excited. I’ve been a huge fan of his since the early 80’s.

SKSM: What do you think about the series?

IVY(Andy Chase): Well, I was a bit mixed about it. I loved how cerebral and strange it was but that was probably it’s downfall as well. It aired on ABC which, because it’s a major network, played 4 minutes of commercials every 15 minutes throughout the show. That became very distracting and broke the rhythm of this kind of movie. It would have been much wiser to get it played on HBO as I think the type of viewers who appreciate this sort of thing would have been found there. ABC viewers are famous for liking their material dumbed-down and not too complicated.

SKSM: Did Ivy have any personal contact with Stephen King during the making of Kingdom Hospital?

IVY(Andy Chase): For a brief while it looked like ABC wasn’t going to agree to the terms of the deal with our label and publisher and, as a result, was about to pass on using our song. We were all quite surprised and upset about it, including Stephen King. He wrote a very strong email to the executives at ABC expressing the extent of his anger if they didn’t use our song. As a result ABC agreed to work it out. We thought that was very cool.

SKSM: Have you become more popular since Kingdom Hospital?

IVY(Andy Chase): A bit. We certainly get a lot of emails from people saying they’re happy they discovered us watching the series.

SKSM: Are you King-fans yourselves? If so, what is your favorite book/movie?

IVY(Andy Chase): Absolutely. We all think Carrie and The Shining are two of the best horror films ever made. And I think I’ve read pretty much everything he wrote up until about 10 years ago when I got too busy with the music business. My favorite book is probably my favorite because it was also my first — Pet Semetary. I read it right when it came out back in the early 80’s.

SKSM: If you were asked to do another track for a King-production, would you accept it, and what track would you like to see in a movie?

IVY(Andy Chase): Absolutely! In a second. We’d even score original stuff for him if he wanted.

IVY(Andy Chase): We’re coming to Spain to play this November ’05, in case any of you live near there. Otherwise, check our website from time to time to find out about what’s going on. www.thebandivy.com