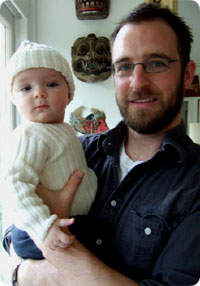 He is the man behind Paul’s Dream Dollar Baby Film.

Ben Lawrence: Born London, 1973. Family moved to Australia the following year. I studied directing at NYU for a short time one summer. Apart from that I worked as a camera assistant for a number of years while making several short films. In 1997 I began directing TV commercials in Australia and have been doing that ever since. In 2003 I started my own production company called Caravan Pictures, based in Sydney, Australia.

SKSM: Why did you changed the orginal title from “Harvey’s Dream” into “Paul’s Dream“?

Ben Lawrence: I changed the title to place it more in an Australian context. Harvey is such an uncommon name here and besides that I based the characters on some of my parents friends who happened to be called Paul and Jan. Even though much younger that the couple portrayed, there were aspects of their life and home that fit with the story. During writing I substituted their names to help me see the characters and it stuck. This simple thing helped bring about a more natural, familiar feel for me with the story I was trying to tell.

SKSM: How come you picked Harvey’s Dream (Paul’s Dream) to develop into a movie? What is it in the story that you like so much?

Ben Lawrence: I had been searching for a short story to adapt for some months before my father gave me ‘Harvey’s Dream’ to read. It was published in the New Yorker and as soon as I read it I thought it would make an interesting film. When I began writing the structure and delved more deeply into the short story, all of these things revealed themselves from the subtext of the story. On the surface it appears a very simple scene, unassuming, slice of life type moment however, the core the story has consequences that go back and forth in time and across generations. Portraying these aspects in a rather benign scene really appealed.

I had a criterea for the scale of film I could realistically make. The fact that ‘Harvey’s Dream’s was basically a two hander in one location also appealed. The intimacy and simplicity of the production also allowed me to focus the lead up work on the actors and hopefully communicate via their performances the power that was present in the short story.

The depth of the story that wasn’t immediately obvious really appealed to me and I wanted to the audience to have a similar reaction. On viewing the film I hoped the audience’s mind would race back through the fragments of the film and piece together the story. While creating that type of resonance for an audience, there is also a terribly sad aspect of the story that was at the core of what I primarily hoped would be translated.

SKSM: When did you make Paul’s Dream? Can you tell me a little about the production? How much did it cost? How long did it take to film it?

Ben Lawrence: We made ‘Paul’s Dream‘ in 2006. The filming took two days in the suburb, Hunters Hill, where I grew up in Sydney. Everyone worked for free and thankfully I had a team of people who I had worked with for a number of years in commercials. The hard costs of the film were about $5000AUD. The real budget would have been much more if we paid people actual costs. Editing took place over a period of about 6 months. The real edit time would have been about 2-3 weeks. It’s just that I relied on available equipment and time for myself and my editor to be free.

We really struggled with the structure. While we tried to create a fragmented structure that unfolded in a non-linear, piece by piece fashion I’m not convinced if we got it right. I would have liked to go back and film a couple of moments in addition to what we’d done after editing.

The aim was to, in the spirit of a dream that often unfolds in this piecemeal way, well mine anyway, I wanted the audience to experience a challenging possibly dissorienting view of this moment via this structure. I’ve had mixed responses to the film and while I don’t think it is a passive viewing, in the end I think we almost got the balance right. One thing I didn’t want to get in the way of was the emotional connection with the characters.

I may be too close to the film but, I was generally happy with the reaction I’ve had to it.

It has been doing the film festival rounds over the last 12 months and the life of the film is coming to an end. It screened at the 2007 Edinburgh Film Festival, 2008 Clermont-Ferrand Festival, 2007 LA Shorts and I think 2008 Sao Paulo Film Festival. I’m waiting to hear about the 2008 Sydney Film Festival, my home town, so fingers crossed.

Ben Lawrence: When I first read the story and asked a few people about acquiring rights for written material, I was met with a lot of resistance. The whole Stephen King dollar baby thing wasn’t well known in Australia then. So regardless I persevered and finally found the contact details for Stephen King’s lawyer/agent. I heard the news about the dollar scheme from them. I was prepared to make a nominal offer and be knocked back and even plead to their sense of creative support for young directors. So when I found out, I was really blown away and that gave me the energy to complete the rest of the film. As anyone knows who has done these type of things, they take a lot of motivation and energy to get done. This was just what was needed. So I really appreciate the what that has done for me.

Ben Lawrence: The funny thing was that I had to get a US dollar cheque written up at my local bank, which actually costed $20. They asked me if I was sure that this is what I wanted. I kept the receipt, at least I was impressed with a cheque made out for a dollar to Stephen King.

SKSM: Did you know that before you where more versions of “Harvey’s Dream” and if you know did you choose another story to adapt into a Dollar Baby?

Ben Lawrence: As I began production on the film I did discover that there were other versions. I haven’t seen any but I’d be keen to have a look if anybody would like to send me a copy.

SKSM: How does it feel that all the King fans out there can’t see your movie? Do you think that will change in the future? Maybe a internet or DVD release would be possible?

Ben Lawrence: I’m sure one day there will be a box set or internet release of some sort. It’s inevitable. There just needs to be enough interest. I’d like to see the Frank Darabont short that was made, that’s out on VHS.

Ben Lawrence: Part of the contract stated that I had to send a copy of the film to Stephen King. On completion of the film I contacted the lawyers and asked where to send it. I never heard back from them, that was 18 months ago. So, I guess it’s not a priority.

When I was making the film I had a vision of Stephen King slowly going through a backlog of short films in his spare time. I imagined he’d get to mine eventually and maybe comment. I dreamt I’d get a letter from him when I was in retirement, after finally seeing it. Maybe one day.

Ben Lawrence: I love the Stephen King story ‘The Body‘. Although it was made into ‘Stand By Me‘, the main premise of it has always stayed with me. Any of the ‘Different Seasons’ stories appeal to me.