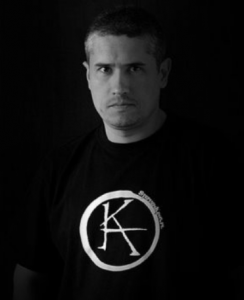 He is the man behind King’s short story Lament Paranoika

Darek Kocurek: Darek is a person living in the fast line, having a lot of weirdest ideas and dreams, usually involved in several projects at one time.

I live in Poland, in Katowice city. It’s an industrial city in the South of Poland. Since about 15 years I’ve been working as a graphic designer. Many of my graphics oscillate between fantasy and horror. It partly results from my interests and partly from cooperation with King’s fun-clubs and cooperation with publishing houses, for which I make covers in styles like that. Many of my pictures are inspired by music, especially ambient-music.

Other passions of mine are photography, books, films, traveling …

SKSM: When did you make Lament Paranoika? Can you tell me a little about the production? How much did it cost? How long did it take to film it?

Darek Kocurek: Work on “Paranoid: a chant” took a little over a year. I started at the beginning of 2013. Film would be created faster if not for that during this time I had, of course, pursue other projects and in fact I could not concentrate only on the film.

The work started without having the camcorder I was counting that the camcorder in the camera would be enough. However, since all the scenes I shot in pretty bad light, I realized that I had to invest a small amount of money for equipment. I took advantage on a Polish crowdfunding portal.

In this way thanks to Polish fans of Stephen King, I collected money for a small camcorder, lighting, etc.

With the collected money, I also could produce a number of gadgets connected with the movie.

SKSM: How come you picked Paranoid to develop into a movie? What is it in the story that you like so much?

Darek Kocurek: First of all, it is one of the most unusual stories of Stephen King. Secondly, it is also one of the least known. As far as I know, many Stephen King’s fans reading collection “Skeleton Crew” skip this story only because it is written in verse. On the other hand those who know the story think that it is absolutely unsuitable for filming, or is too difficult to transfer into a movie. I was of a different opinion. For a long time I detected a great potential and huge possibilities for a short film. Furthermore the story seemed to me quite simple to move on the screen. For example, a great help for all the actors who are amateurs, was that they did not have to say anything.

SKSM: Lament Paranoika it’s not an official Dollar Baby. Why didn’t you ask for permission to make it an official adaptation?

Darek Kocurek: In fact, when I attempted to work on the film, I was convinced that it is included on the list of DB storries. To my surprise, I found out that it was removed some time ago. I wrote to the Stephen King’s office with a question about the possibility of the official implementation but I only received a brief answer that there is no such possibility. Perhaps I’ll try again.

Darek Kocurek: In fact, the whole cooperation with the actors was quite funny. All the scenes with the actors were filmed on a green background. Therefore, I had to explain to them how a place where they are located look like. Certainly the funniest looked scenes from the “man without a face.” Although the figure was about to look serious and a little scary, trust me that this shooting was really hilarious.

SKSM: Are you a Stephen King fan? If so, wich are your favorite works and adaptations?

Darek Kocurek: I am a fan of SK for many years. I have read all books as well as I believe that I watched almost all adaptations. From the books, I love most of them, however there are some I often come back to: “The Dark Tower”, Dallas ’63”, “The Stand”, “Christine”, “IT” and all collections of stories. It is easier for me to choose a favorite film adaptations because it really is not much of these extremely good. My favorites are: “Misery”, “Shawshank redemption”, “Christine”, “Green mile” “Dolores Claiborne”, “Pet sementary” “Stand by me” “Night flier”.

Darek Kocurek: I had a huge stress before the premiere publication and a lot of fears about how the film will be picked up by both Polish and foreign fans. I might also add that no one before made a film adaptation of SK text. I was pleasantly surprised when I received a lot of positive feedback from SK fans from around the world.

Darek Kocurek: Obviously the idea of this project is to present it to festivals, conventions connected with SK or horror films. I would like to share it with any organizer of this type of event. The film is in fact with a Polish lector but also with embedded English subtitles.

Darek Kocurek: Unfortunately, no. I do not even suppose that SK encountered on the information about project that is carried in Poland. But maybe someday…

Darek Kocurek: Many people ask about that and persuades to next adaptation. I do not exclude that in the future I will take the next adaptation. However, at present I have no specified title in mind. A good topic although technically difficult to implement in amateur conditions is the story “Beachworld”. I love SF that is why my interest in this story is so big.

Darek Kocurek: From more interesting project that I realize nowadays are several covers of SF books. When it comes to the topics related to SK, I also started a work under a calendar which I annually prepare for SK Polish fanclub. Probably the theme of this year calendar will be “Paranoid: a chant”.

SKSM: Thanks for taking the time to answer my questions. Is there anything you want to say to our readers?

Darek Kocurek: I would also like to thank you. Greetings to all of SK fans and I would like to invite you to visit “Paranoid: a chant” facebook site where you can track the fate of the movie as well as watch it from time to time.