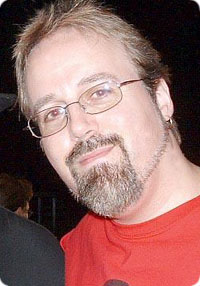 He played in Mark Steensland’s (from a suggestion by Stephen King) Lovecraft’s Pillow as Dr. Brown.

Greg Ropp: I am the President and Director of the Eerie Horror Film Festival, a competition based event that takes place each year in the city of Erie, Pennsylvania in the United States. I’ve been an avid horror fan since the late 1960’s when I first caught the old classics on late night “Creature Features” and in the pages of Famous Monsters of Filmland Magazine.

Greg Ropp: As fate would have it, filmmaker Mark Steensland just happens to be a member of the Eerie Horror Film Festival’s Board of Directors! He asked me if I’d be interested in playing a small role in his film and I said “yes”.
Simple as that.

Greg Ropp: I didn’t have to audition for the part. Mark gave me a copy of the script weeks before the shoot and we went over my dialog and movements the day we shot my scenes. I don’t believe that Mark wrote the part for me but I think he may have had me in mind for the role from the beginning.

Greg Ropp: Mark is an extremely talented filmmaker, screenwriter and all around good guy. He has a wonderful way of walking his actors and production people through the filmmaking process, which is especially helpful to someone like me who has very little experience when it comes to acting. His patience is amazing as is his attention to detail. I can’t say enough good things about him as a director and a friend. This guy lives and breathes film.

Greg Ropp: Only in regards to myself. It’s worth noting here that my other love is music. I was the lead singer and songwriter for two successful regional bands a few years ago (The Void and 5 Empty Chambers) and have a lot of experience on stage. As a singer you have to remember all of your lyrics and with minor exceptions, I never forgot the words to my songs while standing in front of 500 plus people. So imagine my surprise when I get to the set of “Lovecraft’s Pillow” and I forget all of my lines the minute Mark announces that the camera’s are rolling! I drew a complete blank and it’s not like I had many lines to remember. It was so weird. So we had to take a break and actor Shannon Solo, who shares the scene with me, had me speed read the dialog with him while Mark provided me with a much needed cappuccino! A little more wired and confident, we resumed filming and all went well.

Greg Ropp: I know Mark very well and see Shannon Solo from time to time. The others I haven’t seen since the filming. I’m sure I’ll see them again though as this is a pretty small town.

Greg Ropp: I went right back to working on the Eerie Horror Film Festival. I’m working on an acoustic album of my music as well.

SKSM: You played Dr. Brown but where you happy with this role or do you like the role of Sid, Martin more for you?

Greg Ropp: Dr. Brown was a fine role for me. Short and sweet scene, very little dialog and a chance to play a more straight laced character. Deep in my heart I only want to play psychotic, creepy people. haha.

Greg Ropp: Oh, here comes the hate mail! You know, I’m not a big fan of King’s work though his early novels, “Salem’s Lot” and “Carrie” are classics! I do love his short stories and those bordering on straight drama. Is it any surprise that the best King stories are also the best film versions? I mean think about “Stand By Me”, “The Shawshank Redemption” and “The Green Mile”, all incredible movies, all, with the exception of the latter, totally removed from the world of horror and fantasy. I really think King would have made a
great dramatic author. But that’s just me. I realize that he has a huge following and I respect that. My taste in horror authors tend to lean toward those who have long since shuffled off this mortal coil. I’m a big fan of Edgar Allan Poe, HP Lovecraft. Henry James, etc. So I like my horror stories a little more brooding and gothic I suppose.

Greg Ropp: I’m honored to have been noticed for my small role in “Lovecraft’s Pillow” and I hope all of the fans reading this will take the time to check out our film festival’s website, or better yet, come out to Erie in October to visit us!