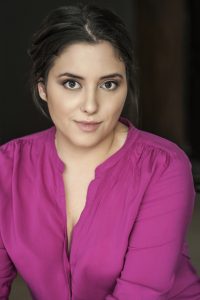 She played in Ashley Good’s Dollar Baby In The Deathroom as Matilda Heinz.

Jennifer Smythe: My name is Jen! I’m an actor as well as a Singer/Songwriter

SKSM: When did you know you wanted to become an actress?

Jennifer Smythe: I knew at the age of 8. My father had put me into ballet when I was a little girl and turns out it wasn’t really my thing. I remember taking my first acting class and I’d never ever felt so alive before

SKSM: How did you become involved in In the deathroom Dollar Baby film?

Jennifer Smythe:  I worked with Ashley Good on a previous film called ‘Pity Party’ and she told me about this Project and I thought it sounded so cool.

Jennifer Smythe:  The cool thing about ‘In the Deathroom’ is Ashley Good totally put her own quirky twist on it. I would say what attracts people to it is the obvious suspense and creepiness of the story and plus people enjoy watching movies and getting creeped out!

Jennifer Smythe:  No, I did not have to audition for the role.

SKSM: You worked with Ashley Good on this film, how was that?

Jennifer Smythe:  Awesome! Ashley is so down to earth and not to mention has a secret talent for make-up too, which you will see.

Jenniffer Smythe:  I thought that the gory make-up and fake blood was pretty cool. Oh, and it was around Halloween when we shot the film and the theatre we were in was haunted, but no ghosts showed up. Maybe they were camera shy?

Jennifer Smythe: Yes! Just saw a few of those people at a screening a few days ago! I hope we all get to work together again.

Jennifer Smythe: I’m working in the hospitality industry as well as focusing on acting, singing and writing music

Jennifer Smythe: Absolutely. I used to be obsessed with ‘Carrie’ when I was a little girl which my mom thought was really strange.

Jennifer Smythe: Thank you so much Reading this interview and I hope you enjoy our film ‘In The Deathroom’