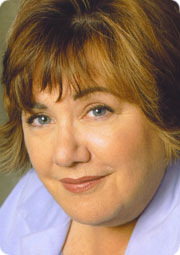 She played in Scott Albanese’s Dollar Baby All That You Love as the Housewife.

Laurie Morgan: I am married with 3 teenage boys ages 18, 16 & 14. I began singing in bands at age 19 and continued until I was 30. I took time off for marriage and children; then when my youngest was about 6 years old I began performing in musical theater. About the same time I began oil painting. A few years later I started auditioning for film and Television. I also play piano and guitar. I am an accomplished painter with my paintings in galleries.

SKSM: How did you become involved in All That You Love?

Laurie Morgan: I became involved with “All That You Love” by answering a casting notice.

Laurie Morgan: I did audition for the part.

SKSM: You worked with Scott Albanese on this film, how was that?

Laurie Morgan: Scott was a very creative and nice guy.

Laurie Morgan: I think the funniest part of making the movie was my audition. I came to the audition in a muumuu, fuzzy slippers and curlers in my hair. Scott loved it so much he asked me to wear them for the filming.

Laurie Morgan: I still keep in contact with Kent Vaughn because we did another movie
together a few years later.

SKSM: What did you do after All That You Love?

Laurie Morgan: Since I did “All that you Love”, I’ve done numerous musical theater, TV and film.

SKSM: There are four different adaptations of this story. What do you think it is in the story that attracts people so much?

Laurie Morgan: I wasn’t familiar with the story before I made the film.

Laurie Morgan: I do like some of Stephen King’s work as long as it’s not the scary type. I prefer the psychological thrillers.