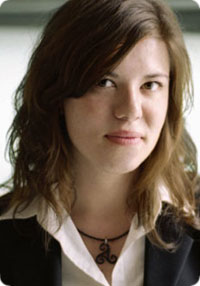 She is the woman behind Tijger Dollar Baby Film.

Leyla Everaers: My name is Leyla Everaers and I study for Director at the Dutch film Academy in Amsterdam. Before I started this study, I have studied Audiovisual Design in Rotterdam for four years. I live in Amsterdam with my cat Britney and I’ll be 25 in a couple of weeks.

SKSM: When did you make Tijger (Here There Be Tygers)? Can you tell me a little about the production? How much did it cost? How long did it take to film it?

Leyla Everaers: In my previous study we had to make a couple of illustrations based on the story ‘Here There Be Tygers’. It’s a very visual story, like all King-stories. The illustrations have been in my drawer for about five years, and all this time I hoped to be able to make a movie out of it. While producing a movie in my third year of study, me and my crew got stuck after five months. I came up with the idea of ‘Here There Be Tygers’, and luckily the writer of the screenplay, Femke Boon, and producer Rozemarijn in ’t Veld liked the idea too. Three weeks later we had a finished script.

There are a couple of rules for making movies on the academy. Everyone gets the same amount of shooting days, the same amount of editing time, and the same amount of money (except for final exam movies, they have a larger budget because of sponsoring). We have shot the film in five days in January and February. We had three months of pre-production. Producer Rozemarijn and her team worked very hard, and while shooting the movie everything was prepared very good. We postproduced the movie for two weeks, and after that the movie was sent to a Visual Effects studio. They worked on ‘our’ tiger for three more months there. We’re still working on the sound, but the movie will probably be finished in July.

SKSM: How come you picked Here There Be Tygers to develop into a movie? What is it in the story that you like so much?

Leyla Everaers: The best part of the story is the magical realism that’s in it. Or what I think is in it. Personally, I don’t like realism, but the fun part of the movie is that you can loose yourself in another world for a while. Kings story is very suited for that. Making the movie was really great. Again, I didn’t expect this kind of attention. It was really weird to be asked when the movie was finished by strangers. I really like it that people are so interested. It’s also scares me, because King fans will have expectations I won’t be able to fulfill. I feel the same way with movies based on books.

Leyla Everaers: A special thing about the movie is the completely digitally created tiger. We discussed a real tiger, but we decided on a digital version. That works great, because we have control of everything the tiger does then. It was the first time for me with Visual Effects, and it has been great. You have to decide on things very early, and wait so long before you see the result. They finished the tiger last week, and it was definately worth the wait!

Leyla Everaers: I hadn’t heard of the Dollar Baby deal until the postproduction. I knew all along I couldn’t screen the movie outside of the academy. I never intended to do so either. But all of a sudden we got media attention, and we were contacted by Stephen King Short Movies.

We haven’t decided whether we will buy the rights or not. The movie is a exercise, and since it hasn’t been finished yet we can’t tell whether it’s been a success or not. The most important thing is that I’ve learned a lot while making it, and I can use that knowledge when creating my final exam movie.

Leyla Everaers: No, I don’t have any other plans for doing more King movies. There are so many beautiful adaptations already! My favourite is ‘The Stand’. That one really impressed me. When I was a teenager, I read the book, and I really love the theme.

Leyla Everaers: Thanks for your interest! I really like to see people appreciate it that much without knowing what it will look like in the end…

Translated by Danny Paap of StephenKing.nl