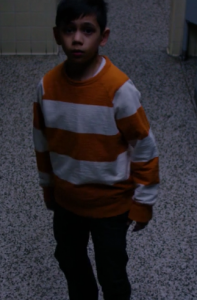 He played in Mike Johnston‘s Here There Be Tygers as Charles.

Logan Oung: Ok well, my name is Logan Oung Garneau I’m eleven years old, I’m a double black stripe in Taekwondo, I love acting, and I love superheroes movies and books, I love gaming, and that’s how I actually bonded with Mike the director.

SKSM: How did you become involved in Here there be tygers Dollar Baby film?

Logan Oung: At the moment I had just started to sign on with City Talent Management. My agent Diane had just got an audition for Here There Be Tigers, and then I got it.

Logan Oung: I think that the fact it was a Stephen King movie attracted lots of people. Also the fact that there is a tiger in the washroom is awesome!

SKSM: You worked with Mike Johnston on this film, how was that?

Logan Oung: Working with Mike was awesome, he took me under his wings, and we had a lot in common. Everyone made me feel welcome especially Mike. Mike understood me more than many people do, which made the job easier.

Logan Oung: Yes, in the scene were I/Charles asked to go to the bathroom Miss Bird asks “Do you have TO URINATE” it took us 5 or 6 tries to not laugh every time she said it.

Logan Oung: Yes I follow Mike, Here There Be Tigers, and Bronwyn.

Logan Oung: Well, I’ve been doing auditions here and there, but for awhile it’s been slow.

Logan Oung: Everyone thinks that I’m Filipino but I’m actually half Cambodian and Caucasian and that I’m almost a belt black in Taekwondo, I’ve been doing since I was 4 years old.

Logan Oung: Thank you for taking the time to read all of this. Everyone has a little actor inside themselves but they just don’t know how to express themselves, luckily I found that in acting.