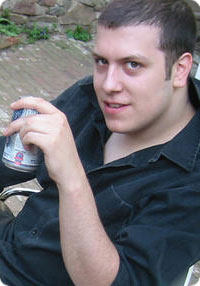 Mark Montalto: My name is Mark Montalto. Originally from Rhinebeck, NY (upstate a little bit), I now live in Manhattan. I’m a recent gradute from the film/animation/video dept. at Rhode Island School of Design, in Providence, RI.

Mark Montalto: I guess a friend had mentioned it to me at some point. After that, I did a little research on it (mostly on this website and others like it) and also, I spoke with James Renner about how the process actually works. James was just finishing his version of “All That You Love” as I was getting ready to shoot mine.

Mark Montalto: I always liked that story. I first read it a while ago in high school, around the time I 1st picked up the Dark Tower books I think. When the 7th and final Dark Tower book came out, all of my roomates and I were huge into King again and thats when I went back and read “All That You Love”. At the time, I was trying to write a script for my FAV degree project, but I was at the point where I had to start shooting in a few weeks and I was nowhere near done with my own script. I remember thinking I could write and re-write my own script forever and never be happy with it, and theres a great story right here in front of me. Thats when i decided to shoot ATYL.

Mark Montalto: And so, a couple of weeks later (winter ’05), I had a shooting script all ready, and began casting for Alfie and looking for locations. The story is set in Nebraska so I was hard pressed to find areas the looked similar enough. I actually ended up using Google Earth (Keyhole at the time) to find a big field outside of Providence. I used a Panasonic AGDVX-100 that I checked out from the school, with mostly natural lighting. None of the actors that came to audition were perfect and i ended up using a friend of a friend, Jack Roach (who actually used to be a salesman) for the part. It probably cost me a few hundred bucks to make the movie. Mostly for gas, a few miniDV tapes and renting the motel room… they wouldnt let me shoot for free! Actually they wouldnt let me shoot at all .. i had to try to sneak it.

Mark Montalto: Oh probably blowing all the electricity in the motel with our lighting… or Jack shoving onions up his nose for the final scene where Alfie is supposed to be crying. It didnt end up looking all that real anyway.

Mark Montalto: Oh god… I don’t if they will wanna see my movie… But in case they do, Im working on getting DVDs copies made.

SKSM: Did you have any personal contact with King during the making of the movie? Has he seen it (and if so, what did he think about it)? Mark Montalto: Nah, no personal contact. And I doubt he’s seen it. I’m not even entirely sure i bought the rights to it. I was in contact with his office and they asked me to send the script with a scheck for a dollar. I was supposed to receive something signed in return, i beleive, but i never got it. After that I just went ahead and made the movie. I’d love to follow up on that and maybe i could show it around at some point… I just havent yet.

SKSM: What do you think of the other three versions of “All That You Love Will Be Carried Away”?

Mark Montalto: The only other one I’ve seen is James Renner’s. He was nice enough to send me a copy of his version, and of his script to get ideas for my version. I thought it was really good, and I’m so jealous that he got Joe Bob Briggs and Harvey Pekar. What the hell?! I look forward to seeing the others.

Mark Montalto: At the moment, no. Id love to do something with the Dark Tower books, but i just dont think it could be done… especially as a movie. Maaaaaybe as a miniseries or something. . . but doubtful. But if it could be, Id do that.

Mark Montalto: Go do something else, now that you’ve wasted 5 minutes reading all this. I mean you could have made a five minute movie just then! and thanks!
-Mark A Montalto