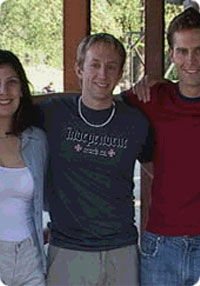 He is the man behind Rainy Season Dollar Baby Film.

Nick Wauters: I was born and raised in Belgium, moved to the states where I attended Oberlin College, before moving to Los Angeles. After getting started as a production assistants on various television shows, I became an editor on reality shows and continued writing screenplays the side.

SKSM: When did you make Rainy Season? Can you tell me a little about the production? How much did it cost? How long did it take to film it?

Nick Wauters: We shot the film in the spring of 2002. It’s been a while, so i can’t remember the exact number, but I believe we spent around $10,000 total on the production. It took 3 days to shoot and many weeks of post production. Most of the people involved volunteered their services.

SKSM: How come you picked Rainy Season to develop into a movie? What is it in the story that you like so much?

Nick Wauters: I had read Rainy Season 10 years earlier and loved it. I thought it was such a great mix of horror and comedy… It reminded me of horror classics from the ’50s, and movies such as the Blob. It followed the outline, structure and rules of a typical horror story, yet had a tongue-in-cheek twist to it. loved it!

Nick Wauters: I had heard stories, but didn’t know if they were true. I just wrote him a few times then it just happened.

Nick Wauters: We had a lot of funny moments, although most of them during the actual shoot didn’t seem very funny but were just stressful. For instance, frogs jumping around everywhere before we’d start rolling, and not wanting to move when they were supposed to when the camera was actually rolling… The dog we used kept leaving the shot in the middle of a take… little things like that…

SKSM: How does it feel that all the King fans out there can’t see your movie? Do you think that will change in the future? Maybe a video or dvd release would be possible?

Nick Wauters: There are no plans at this time. We had an agreement for a limited release in festivals because of certains contracts tying the rights to Rainy Season I believe. I get a lot of emails from people who would like to see it. Unfortunately, there’s nothing i can do at this time. Maybe there’s someone out there who wants to arrange a compilation of Stephen King shorts and deal with all the paperwork? Who knows!…

Nick Wauters: Has he seen it (and if so, what did he think about it)? He dropped me a few notes and i got some feedback through his assistant also. He did see the film and found it “fun and enjoyable.”

Nick Wauters: I would of course, love to make another Stephen King story. We did look into it for a while, however the cost of producing a short and not being able to recoup your investment is considerable. Who knows, maybe in the future, I can take it to the next step. The Mist is one of my favorite stories. I believe Frank Darabont still own the option on it. I think it’s a great story and I love the open ending. The man In The Black Suit, from Everything’s Eventual, is also one of my favorite short stories.