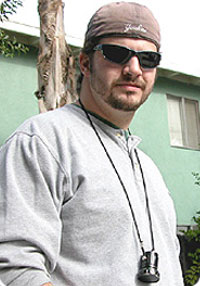 He is the man behind All That You Love Dollar Baby Film.

Scott Albanese: I am originally from Ithaca New York. I did my undergraduate work at SUNY Brockport. (Brockport, NY) I graduated in December 2000. I majored in Radio & TV Broadcasting with a minor in Film Studies. I then obtained my MFA in Film Production from Chapman University. I just graduated this past May. I am currently developing a feature length project.

SKSM: When did you make All That You Love? Can you tell me a little about the production? How much did it cost? How long did it take to film it?

Scott Albanese: We shot ATYL in November 2003. It took us 7 days to shoot it. We shot at 5 locations, plus time spent in the studio. It cost more than I had planned, but my hope is that it will show on screen that it was worth every penny.

Scott Albanese: This story hits on a very personal note for me. I have had to deal with two suicides that affected me deeply. And what struck me with this story was the way in which King handled this subject. The open-ended conclusion forced me to consider some things with my personal experiences dealing with suicide. I couldn’t make the call for either person in my life and King decided he couldn’t make the call for Alfie. And, in real life, all you can do is hope that if someone finds themselves in that bad of a spot, that they will find some inspiration to keep going. I found this story to be very touching and honest regarding this topic.

Scott Albanese: I couldn’t really tell you where I heard it first, but I had known for some time before I contacted him for the rights.

Scott Albanese: All in all we had a pretty smooth ride during the shoot. But things did get a little crazy on the last day of shooting. About an hour into the day, I was informed that we had a lot less film left than we thought. Seeing as it wasn’t an option to obtain more film or shoot another day, I decided to do more rehearsal takes to insure that we got what we needed when we burned film. This seemed to be the answer…until about 4pm that afternoon when I was informed that we were running out of daylight. Now, this wouldn’t be of major concern to me had we been in the studio, but we weren’t… So now we were pressed for light as well! Needless to say, I was about to explode. But, I had a great cast and crew who kicked into high gear and made sure we got everything we needed. I am grateful to them all.

SKSM: How does it feel that all the King fans out there can’t see your movie? Do you think that will change in the future? Maybe a video or DVD release would be possible?

Scott Albanese: My hopes are to be able to have the film on the website eventually. I will have to clear that with Mr. King, of course. As of right now, we are cleared to enter festivals only. Any festivals that we get into will be posted on the site in due time. So that if any fans are dying to see it, they will have a heads up as to where/when it will be shown. We are still working on the DVD, but that will not be for sale. We are making them for festivals, cast, crew, and associated families.

Scott Albanese: I have not had the pleasure of speaking to Mr. King. He has not seen it as of yet, as I want to send him a DVD copy. I would greatly enjoy hearing his thoughts on the film.

Scott Albanese: I have no plans on making more King-based films, but I am always open. The one King story I would love to bring to film is the one he won’t allow that to happen to. And from the looks of it, I am not the only one 😉

Scott Albanese: Long days and pleasant nights to you all.