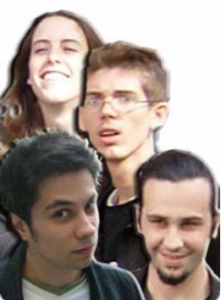 He is the man behind Livraisons Matinales

SKSM: Could you start with telling me a bit about yourself and your team? Who are you and what do you do?

Stephane Montel: My name is Stephane Montel, me and my teammates (Clementine Tronel, Florent Mack and Christian Radosaljevic) are just graduated of L’Institut Superieur d’Arts Appliqués of Paris. We studyed every aspect in the production of a 3d animation movie. Currently, we’re looking for a job in the filmmaking industry !

SKSM: When did you make Livraisons Matinales(Milkman 1)? Can you tell me a little about the production? How much did it cost? How long did it take to film it?

Stephane Montel: We made Livraisons Matinales this year, it took five months (from February to June) to make the movie, from the idea to the final cut. The film was made as our graduation movie for school. It didn’t cost a thing, unless several weeks without sleep and a harsh electricity bill due to the computers turned on every time ! It’s a real home made movie, all the team lived together during almost two months.

SKSM: How come you picked Livraisons Matinales(Milkman 1) to develop into a animation movie? What is it in the story that you like so much?

Stephane Montel: When we were looking for a scenario it happened that Clementine was reading a book gathering several novels of S.King. She told us about Livraisons Matinales. We all liked her and then we started to think about how to develop it into an animation movie. This novel was pretty cool to put on screen in a short time frame. King well describes the background, the mood, the characters but never go too far in the why/what/how blabla… so you have everything you need to turn the story in the way you want without being annoyed by useless details.

SKSM: Your movie is not a dollar baby like all other dollar babies. How did you find out that King sold the movie rights to some of his stories for just $1?

Stephane Montel: I just be aware of this when i watched your website. We didn’t know there were such a deal. It’s great that S.King share his work and his talent with some junior filmmaker, few people do that in the industry.

Stephane Montel: Making a movie is a time eater. When the deadline comes, you don’t see your family, you don’t see your friends… You live for the hope of finishing it. You make joke that only your teammates can understand and you can sink in the deepest sadness for the little bug you didn’t see. It’s very emotive !

Stephane Montel: No, all we have made is in the movie. But for my part, just switch the ending music of Hermann Hermitt “There is a kind of hush” by the other title of the same artist “No milk today”.

SKSM: How does it feel that all the King fans out there can see your movie? Do you like the attention of your film around the world?

Stephane Montel: Yes of course, when you spend so much time on a project the best reward is when your movie can be see by a lot of spectators and when you received feedback, good or wrong. The Stephen King’s fans i could show the movie in France were particulary positive about it. I guess they saw too much very bad movies based upon Stephen King’s stories… We also hope that the movie will be selected for animation film festivals around the world.

SKSM: Did you have any personal contact with King during the making of the movie-animation? Has he seen it (and if so, what did he think about it)?

Stephane Montel: Absolutly not. We tried to create a topic about the film on the official stephen king message board but it never appeared, i gess the moderators did not validate him. If you guys have any tricks to contact Stephen King, tell us ! It would be great if he could see our movie.

Stephane Montel: Currently we don’t have any project on an other Stephen King’s story. But a lot of Stephen King fans in France told me that the short story “Monkey” would be a good choice… Livraisons Matinales will maybe give ideas to other students in filmmaking and animation to work on a Stephen King’s story.

Stephane Montel: Do you know someone at Pixar or Dreamworks ? I hope you will enjoy watching the films as much as we enjoyed to make it. Thank to mister King to have made such good stories and thank to you !