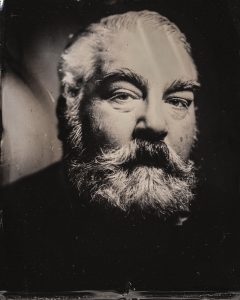 SKSM: How did you become involved in Willa Dollar Baby film?

Theodore Bouloukos: I was cast traditionally, through the audition process.

Theodore Bouloukos: The fact that a ghost story is really a love story, I suspect.

Theodore Bouloukos: I auditioned, yes, as I mentioned previously.

SKSM: You worked with Christopher Birk on this film, how was that?

Theodore Bouloukos: This was his first directorial effort, so he was very collaborative in his approach to developing each character, which was quite nice. He was very professional and solicitous. I enjoyed working with him.

Theodore Bouloukos: Well, owing to budgetary reasons we were forced to shoot in two stretches, in June and then in August. But I had another role for which I had to shave my beard, so when we resumed shooting Willa in August our makeup lady had to find and fasten (with glue) a beard resembling mine; and its texture was so clearly not my own, I found it amusing to wear.

Theodore Bouloukos: I remain quite close to the cinematographer Nathaniel Kramer, who made Willa an absolute visual feast. We’ve since worked together on a TV pilot and another film. He’s really a buddy of mine. The actress, Susan Kirby, who played my wife remains connected to me through social media, as do Christopher and the assistant camera, Lewis Smithingham; actually, Lewis is another friend with whom I have fairly regular contact.

Theodore Bouloukos: I have numerous film projects in various states; others hitting the festival circuit; and my own participation in a documentary that a lovely British filmmaker, called Charlie Williams, is doing about me and my life as an actor. He was the editor of a film of mine, called Bag Boy Lover Boy, and he somehow found me worthy to pursue as a subject: that of struggling, working New York actor. I think my being one at age 55 intrigued him more so than the usual fodder that feeds this trope.

Theodore Bouloukos: I’m a fan of his critical writing and short stories, mainly; which I realize receive less import than his novels, especially those adapted to screen.

Theodore Bouloukos: No, I think you covered the waterfront, as they say. Thanks!