He is the author of Stephen King Dollar Baby: The Book

SKSM: Can you introduce yourself to our readers?

Anthony Northrup: Hello there! And thank you for having me. I am Anthony Northrup. I have been a contributor to our local newspaper, the Tri County Sun for 8yrs, a contributor to Through the Black Hole web page for 8yrs writing celebrity interviews, film & book reviews, and promoting.  I have won two North Dakota Writer’s Awards. I have covered the Crypticon Horror Con in Minnesota for 3yrs. I hosted two Stephen King Dollar Baby Film fests at Crypticon MN 2014 and 2015. I am also the creator and head writer of All Things King – the Stephen King fan page on Facebook for 9yrs. with over 5100 members. And now, I just finished my first book being published, STEPHEN KING DOLLAR BABY: The Book. 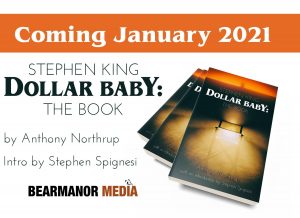 SKSM: You have written Stephen King Dollar Baby: The Book. When will the release date be?

Anthony Northrup: As of right now, the release is scheduled for January 19th, 2021. That’s the plan.

SKSM: Will there be a pre-Order release date?

Anthony Northrup: It’s coming soon and you’ll be the first to know as soon as we have a specific date.

SKSM: Will it be possible to buy the book world wide?

Anthony Northrup: YES!  The book will be available for everyone around the world to enjoy! And that is very exciting in itself.

SKSM: What were some of the challenges with writing your book?

Anthony Northrup: Well, I have been doing interviews with Dollar Baby filmmakers and reviewing their films since 2013.  When I earned their trust and word got around the Dollar Baby community, it got easier to get the interviews with the filmmakers. However, it took a lot of work, a lot of time, and it’s not easy getting in touch with some of them. Also, I started the book back in February 2020, right when the Covid-19 pandemic began and it was a little difficult to work around the challenges we’ve gone through this year.

SKSM: Why were you attracted to the Dollar Baby films?

Anthony Northrup: That is a very good question. I have been a Stephen King fan for over 40yrs. I saw The Shining in 1980 when I was 9yrs. I watched Stephen King films when I was a kid growing up in the 80’s and I didn’t buy my first book until 1986 which was Different Seasons because it had ‘The Body’ in it and that was the same year Stand By Me came out. It really touched me personally. In 1989, I bought Pet Sematary and to this day, it is the only book to ever scare me! Since then, I started buying King books, movies, collectibles, and opened my Stephen King fan page on social media, All Things King in 2012. During all of this, I went from fanboy to Stephen King scholar. I started studying King’s works not just reading & collecting them. I have author, Stephen Spignesi to thank for that. As I studied, it was in Spignesi’s monstrosity sized book, Stephen King Encyclopedia that I first read about something called, “Stephen King Dollar Baby” program. When I first read this, I was like, ‘Dollar Baby… what’s that!?’ I read all about the history of the program, Why King started it, and then found out there are short films out there based on King’s short stories by independent filmmakers. I was beyond interested and excited to learn more about this program and hopefully see these rare films. It was Dollar Baby, Billy Hanson (director of Dollar Baby, Survivor Type) who gave me my first interview and the rest, as they say, is history. The Dollar Baby films themselves are just pure amazing! These are some of the best, talented, most entertaining short films I have ever seen. The men and woman who took a Stephen King story and brought their vision to the big screen, are just so talented it truly is a joy and honor that I had such a great opportunity to be involved with this wonderful group of filmmakers.

SKSM: Talk about some of the contributor to your book. Who all did you choose?

Anthony Northrup: Other than the 55 Dollar Baby filmmakers themselves, I have a wide verity of contributors to the book. Most are connected to Stephen King in the sense of films, books, and other things. I have famous directors such as, Mick Garris, Tommy McLoughlin, artist Glenn Chadbourne and Paul Michael Kane, authors such as; Stephen Spignesi, Richard Chizmar, Andrew Rausch, Lee Gambin, Kevin Quigley, and David Tocher. I also have actors who starred in a Dollar Baby film such as, Peter Holland (Uncle Otto’s Truck) and Tonya Ivey (Paranoid: A Chant). I have web page writers such as, Hans Ake Lilja and you, Oscar. And lastly, it wouldn’t be a book about Stephen King without hearing from the most important people of all: the fans! I have a lot of Constant Readers in the book from around the world in special chapters in the book.

SKSM: Was it difficult for you to convince them to contribute an essay for your book?

Anthony Northrup: For those who contributed the essay’s, for the most part, No. I have known everyone involved with the book for a long time, they are great friends, and I have interviewed and promoted their projects in the past, so everyone was very excited and ready to be a part of this wonderful book right away, so it didn’t take much to convince them.

SKSM: Have you written before about Stephen King’s work?

Anthony Northrup: The only thing I have ever written in regards to Stephen King is, film reviews and book reviews which were published in our local newspaper and the web pages I write for.  I’ve also written a few Stephen King retrospects as well and interviewed actors and directors of King’s films.

SKSM: Did you get any feedback from King’s company about your book project?

Anthony Northrup: I did reach out for a quote by King for the book, but as we all know, he keeps a very busy schedule. So, I didn’t expect to hear back, but it would’ve been amazing if I had.

SKSM: If you could write another book dedicated to King’s work, would you? Why?

Anthony Northrup: Absolutely! I have a lot of ideas roaming around right now so we’ll have to wait and see, but YOU and the readers will be the first to know.

SKSM: What’s the next for you?

Anthony Northrup: A lot of REST! (*laughs). Seriously, I will continue to write for Tri County Sun and Through the Black Hole with celebrity interviews and reviews. As far as book wise, I think I just want to enjoy the ride, so to speak, and help promote the book for most of 2021. If opportunity comes my way for a second book, we’ll see at that time what happens.  I would love to write another book, but for now I’m just enjoying the moment.

SKSM: Thanks for taking the time to answer my questions. Do you like to add anything else?

Anthony Northrup: Yes. First off, I wrote this book for the fans. I wanted Stephen King fans around the world to look behind the curtain and see a part of the Stephen King universe that very, very few will ever see or even know about. I wanted to share this wonderful world known as, the Dollar Babies and let fans know there is some great talent out there. If we ever have film fests again, hopefully fans will be able to get out and see some of these films. Based on my experience of being part of the Dollar Baby world for 8yrs now, I highly recommend that all fans go beyond King’s books and learn as much as you can about the greatest writer of our generation. I wrote STEPHEN KING DOLLAR BABY: The Book as a “love letter” to the Dollar Babies and to all fans around the world. This one is for you!  I want to also Thank YOU Oscar for having me here today for this interview. It was my first one and I’m very honored. Thank you for all your support and for all you do for the Dollar Baby community. Keep up the great work my friend.  Enjoy the book Constant Readers! Long Days Pleasant Nights. 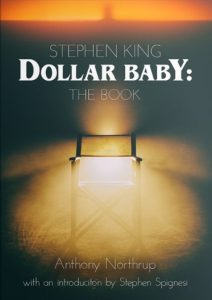 Here are the names of all in the book: