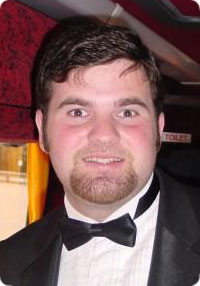 Anthony Kaneaster: I am a vocal performance major at UCI. I am basically a full time student who tires to make movies on his spare time.

Anthony Kaneaster: “All that you Love” was actually a semester long project that I completed in my senior year of high school. I basically did all of it on my own. I wrote the script, shot it, acted in it, made the music for it, and edited it. I even made a website for it. It ended up costing me nothing because I did it all on my own. All the equipment I used was provided by the school. Filming was difficult, because operating the camera and acting in the front of the camera is difficult to do at the same time. It took about a week to plan shots and then three or four days of filming.

Anthony Kaneaster: Well, when I finished reading Everything’s Eventual, that story just stuck out to me. It seemed completely different from any of the other stories. It just stayed with me and later on when I was sorting through possible movie projects, All that you Love just seemed like a logical choice. Simply put, it is a great story.

Anthony Kaneaster: When I was doing research for the film I stumbled upon his concept of the Dollar baby. So sent him an e-mail explaining what I was doing. I never actually sent him the check. The correspondent who e-mailed me back said since it was a student project I was not bound by the same regulations that would apply to a regular filmmaker. Oh well.

Anthony Kaneaster: Not really, it was pretty straightforward.

Anthony Kaneaster: It’s awkward but kind of cool at the same time. I didn’t really think that this would make it beyond the classroom. It’s a pleasant surprise.

Anthony Kaneaster: Not him personally. As I said before I sent a few e-mails concerning my project, but he did not personally respond.

Anthony Kaneaster: Of course I would love to see a Dark Tower Film. But I am probably the last person to make that happen. There are a lot of great choices, but if I were to choose a story to make into a film it would probably be Quitter’s Inc.

Anthony Kaneaster: No, just that I hope that I did the story justice.