“Over 40yrs ago, Stephen King began his Stephen King Dollar Baby Program. A program for independent filmmakers to make short film adaptations of his works for one dollar and a signed contract . Now, a new book is being released full of interviews of 50 of those Dollar Baby filmmakers, film reviews, essay’s, fun facts, and a whole lot more! This is a book for Stephen King fans by a Stephen King fan. STEPHEN KING DOLLAR BABY: The Book By Anthony Northrup is coming out January 2021! Pre-order date announcement coming soon!”

Read the interview with the author here 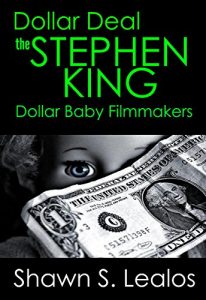 In 1976, Stephen King began allowing student filmmakers to create short films based on his short stories. SInce that time, over 80 filmmakers have taken Mr. King up on this offer.

Those films are know as the Dollar Baby Films, but for many people they have remained almost a myth. They can only be seen at film festivals, and many have never been seen at all.

While Frank Darabont (Shawshank Redemption, Green Mile) is the mos famous of the Dollar Baby Filmmakers, many more have gone on to enjoy careers in Hollywood, on television, and as novelists in their own right.

These are the Dollar Baby Filmmakers. This is their story.