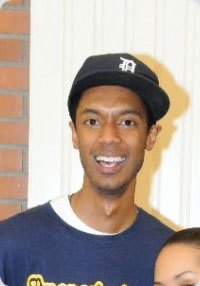 He played in Sarah Sterchele’s Dollar Baby Walking Ghost as The Gunslinger.

Jus Buckingham: My name is Jus Buckingham. I’m originally from Lansing, Michigan. I am an actor and musician.

SKSM: How did you become involved in the Walking Ghost?

Jus Buckingham: Some people in the film department of my college were putting the project together. They held auditions and I got the part.

Jus Buckingham: I auditioned. I knew some of the crew through plays I had done in the area.

SKSM: In the original story the character is a white person, how did you handle this?

Jus Buckingham: It wasn’t a problem. It wasn’t something that we thought about.

Jus Buckingham: Ha! I remember shooting some of the scenes in the winter and it gets cold in Michigan. REALLY cold! There was a cold advisory that went one night when we were filming, but we had a schedule to stick to. So the whole night, we would shoot a scene and I would run inside to get warm. It was like a well oiled machine! It’s funny because the movie looks like we were in a hot desert, but in reality we were in huge sand dunes in the dead of a Michigan winter.
We had a lot of fun on this shoot. Too many things to name!

SKSM: You worked with Sarah Sterchele on this film, how was that?

Jus Buckingham: She was great. It was her first time out I believe, so we learned a lot together.

Jus Buckingham: I’ve moved away, but I talk to some people from the project every now and then. Usually facebook or myspace.

SKSM: What did you do after The Walking Ghost?

Jus Buckingham: I was involved in many, many plays! I’ve starred in some independent movies. I had a stint in a hip hop band called “Cloth & Canvas” as the saxophone player and song writer. I’ve also produced music on my own and for other artists all over.

SKSM: In the beginning the title was “The Gunslinger” and after that it changed into The Walking Ghost. What do you think of that?

Jus Buckingham: I believe it was changed, because the story was an interpretation of “The Gunslinger.”

Jus Buckingham: I am a big fan of Stephen King’s work!

Jus Buckingham: No, thanks for the opportunity. You can catch up with my current music and other works at myspace.com/imanactorhireme