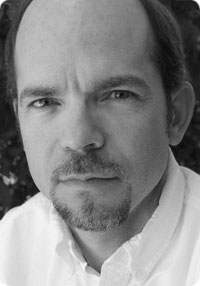 He is the man behind a suggestion by Stephen King Lovecraft’s Pillow.

Mark Steensland: I’m a writer and filmmaker who teaches production and screenwriting at Penn State in Erie, PA. I’ve been a filmmaker for a very long time time. I would say the first movie that really made me want to make movies was Brian DePalma’s Phantom of the Paradise, which I saw when I was 9-years-old. After that, I saw Halloween, and then I really started to get into it. I used my family’s old Super-8 film camera to make my first movie, called Darkness Is Always Black. I never technically finished it, but I was definitely hooked. Over the years, I’ve been making films of one kind or another. I’ve worked on feature films (such as Midnight Run and Wisdom) and I’ve made my own (The Last Way Out and The Gospel According to Philip K. Dick). I’ve also made lots of shorts and music videos and commercials.

SKSM: When did you make Lovecraft’s Pillow? Can you tell me a little about the production? How much did it cost? How long did it take to film it?

Mark Steensland: I made Lovecraft’s Pillow in August of 2006. I had just finished another short, called Sucker, and I was looking for something else to make. I spent a lot of time in pre-production, building sets and set pieces (such as the Pawn Shop sign and the insane asylum padded cell). The actual shooting only took a few days total, but the rest of the work around those few days totaled many weeks. In terms of actual money spent, I would say less than $250. I am fortunate enough to have all my own gear and most of the things I built were from found materials — that is, stuff I already had or could find easily.

SKSM: How come you picked Lovecraft’s Pillow to develop into a movie? What is it in the story that you like so much?

Mark Steensland: The main reason I picked Lovecraft’s Pillow was because of King’s challenge. After I read the intro, I just kept thinking about it in the back of my mind. Then, when I was looking for another idea, I realized that if we could get something workable from his source material, it would make a great short and would likely get some attention because of King and Lovecraft. Then I asked my friend and writing partner, Rick Hautala, a multi-million copy best-selling author in his own right, to write the script and I knew that would give us another reason to be looked at.

SKSM: Your movie is not a dollar baby like all other dollar babies. It wasnt based on a story by King, but just on a suggestion. Was it hard to convert this suggestion into a short movie?

Mark Steensland: I knew we were making a short film, so that right there is a big help in terms of limiting the overall scope. I think King had envisioned a much larger canvas for the story idea, of course. A novel, for instance. And I think we could develop something more because the material is so rich. But I really wanted to stick with the short idea, so I just started thinking about the guy who would be excited by this find and what might happen to him. It wasn’t long before the character of the wife entered the picture and we were off.

Mark Steensland: As I said earlier, I built everything you see. So I had constructed the Pawn Shop sign and then I built the crane and a special platform for the crane in order to get the camera 18 feet in the air. The store we used as our pawn shop location was kind enough to let us hang that sign off their roof, but let me tell you — it was a very scary situation. I hauled the sign up there and I had designed some special weights to hold it in place, but I had no real safety gear and our crew was so small, I was up there by myself. So as I was letting the sign over the edge, I suddenly started thinking it was going to pull me right off with it — two stories to the ground. Needless to say, that didn’t happen, but I’m getting weak-kneed just thinking about it again right now.

Mark Steensland: I’m really excited by the attention it’s been getting. We premiered in England and then played at the H.P. Lovecraft Festival in the U.S. before also playing at the Eerie Horror Fest in Erie, PA. All the response we’ve gotten so far has been really great. We’re considering a couple of release options. The nice thing is that since this is not strictly a King adaptation, we’re free to do with it what we want.

Mark Steensland: We haven’t heard anything so far. I’m friends with some people he knows, such as Bev Vincent, who writes the King column for Cemetery Dance magazine. Bev really likes the movie and he has written about it for a future column. He also helped us send a copy to King. And Rick Hautala, of course, went to college with King and they still have some contact. Rick also sent a copy of the movie his way. But again, we haven’t heard anything and frankly, I’m not holding my breath. The guy’s so busy with all his own stuff, I would be surprised if he would have time for our little movie.

SKSM: Do you have any plans for making more movies based on Stephen King’s idea’s? If you could pick – at least – one story to shoot, which one would it be and why?

Mark Steensland: I would love to do more with some King material. I would hesitate to do a real dollar baby only because as more and more filmmakers make those, the same stories are getting adapated over and over. I think it will become harder to tell who made which version. But if I could get a King idea to make a real movie out of…I don’t know. That’s so tough since so many of them have already been made. I would love to see his script for Gerald’s Game.

Mark Steensland: Thanks. Without an audience, film is meaningless. And without fans, you can’t have a career. Keep watching and check in at my Web site, www.channel99.org, to see what’s happening.