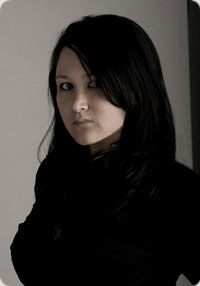 She is the woman behind Walking Ghost

Sarah Sterchele: I’ve recently graduated from Eastern Michigan University with a degree in television and film production, and now I’m off to seek my fame and fortune.

SKSM: When did you make The Walking Ghost? Can you tell me a little about the production? How much did it cost? How long did it take to film it?

Sarah Sterchele: “The Walking Ghost” was created winter of 2005 – the worst time of the year to shoot a film in Michigan. Shooting took approximately 6 weekends, and cost about $1000 total.

SKSM: How come you picked The Gunslinger to develop into a movie called The Walking Ghost? What is it in the story that you like so much?

Sarah Sterchele: This is going to be a long one…

I chose “The Gunslinger” for several reasons. I am a big fan of Italian Westerns. I love how Italian Neo-Realism put a spin on an inherently American genre. Compared to the American Western, everything is so minimalistic – the acting, the dialogue, even the scenery, in a way. You see these great expanses of land, the Spanish panorama, and it’s absolutely beautiful, but at the same time, it dwarfs the human condition. I also find the themes fascinationg – the disillusionment of morality and desolate indidualism. Anyway, I felt that the first book, The Gunslinger, embodied everything I loved about the genre. Secondly, and more importantly, however, was our budget. We were shooting a short, silent film, and we thought to ourselves, “What story could we tell with no dialogue that could narrate itself entirely through pantomine?” and again, of course, the Italian Western suited our needs.

Sarah Sterchele: Heh, at first I didn’t know, which is why so many people accuse us of mangling the film. The film was made as a senior thesis and was intended to be shown in film festivals. Not knowing that Stephen King sold rights, we altered The Gunslinger enough so that on the surface, no one could accuse us of stealing King’s ideas. However, if you look closely, the basic premise of the story is still there, just a little bit different.

Sarah Sterchele: Working with a competent cast and crew was special. Editing was a drag though – we had to cut the film with a razor – yes, a RAZOR, and splice it with tape! Hours and hours of toiling over film strips…

SKSM: How does it feel that all the King fans out there can’t see your movie anymore? Do you think that will change in the future? Maybe a video/dvd or internet broadcast release again would be possible?

Sarah Sterchele: I’m kind of glad they can’t see it, because I think everyone hated it and I get tired of the unwarranted criticisms that I STILL receive from angry fans!

Sarah Sterchele: I received an e-mail from his assistant, and that’s about it. It would be cool if he spent 10 minutes of his life watching it, but he’s probably much too busy swimming in his indoor pool.
SKSM: What do you think of Robert David Cochrane 2004 version of The Gunslinger?

Sarah Sterchele: It’s different. His is a direct adaptation of a small event in the book, word for word. Ours encompasses a broader timespan of the book and is more inspired by the book rather than adapted from. Mostly though, I find it strange that in his version, one person plays all three characters – Come on…doesn’t anyone else think that’s weird (or egotistical and self-aggrandizing)?

“The reason Cochrane played all three roles was because that film was made specifically for and won Simon & Schuster’s (King’s Publisher) “American Gunslinger” contest whose rules required only one person appear in the film.” Link: http://www.simonsays.com/subs/21/RCochrane.html

Sarah Sterchele: Well, it would have to be book 4 of the Dark Tower Series – Wizard and Glass, because that is my favorite book of the series.

Sarah Sterchele: I have no fans!! Boo. But, I do want to take the time to say thank-you to everyone who participated in the making of this film. Although you all have moved on with your lives, the time and effort you put into it is greatly appreciated. Everyone gave it 110% (except Doug) and for that I am grateful. (Just kidding Doug, you were super.)