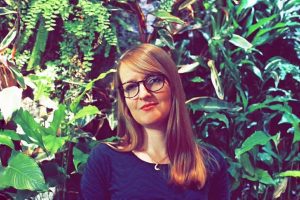 She is the woman behind In The Deathroom Dollar Baby Film.

Ashley Good: My name is Ashley, and I am an independent filmmaker and screenwriter from Victoria, British Columbia (Canada), as well as the Programming Coordinator at a local filmmakers society.

SKSM: When did you know you wanted to become a filmmaker?

Ashley Good: I decided to become a filmmaker when I realized that if I wanted to have any of my screenplays made, I was going to have to film them myself.

My first project was a “proof of concept” pilot for a potential series that I wrote. It was incredibly low budget (some of the actors even took turns working as boom ops), but as soon as I said “action” for the first time, I knew that I wanted to focus on filmmaking.

SKSM: When did you make In the Deathroom? Can you tell me a little about the production? How much did it cost? How long did it take to film it?

Ashley Good: In the Deathroom was shot over one day in October. It was one of the most straight forward productions that I have worked on, as I had a very clear mental image of how I wanted it to look. It was a tricky to explain my “game show” plans to the rest of the crew, but as soon as one of the leads, Ross Ogilvie (Escobar) said “Like Running Man!” the rest of the crew understood.

The entire production had a budget of less than $500 CAD.

SKSM: How come you picked In the Deathroom to develop into a movie? What is it in the story that you like so much?

Ashley Good: I picked In the Deathroom because it of its twisted underlying dark humour. My own projects have all been dark comedies, so I wanted to pick a Dollar Baby that I could hopefully do justice to. Popsy would have been interesting to attempt, but it would have been so out of my comfort zone to direct that I don’t believe I could have been true to the story.

Ashley Good: It was referenced somewhere online. I don’t recall the website.

Ashley Good: Because it was such a low budget movie, and because I will joyfully accept any chance I have to work with fake blood, I actually did all of the make up and special effects myself. Ross Ogilvie (Escobar) and Alex Biddiscome (Fletcher) were kind enough to be my guinea pigs, as I had never worked with liquid latex before.

SKSM: How does it feel that all the King fans out there can’t see your movie? Do you think that will change in the future? Maybe a internet/dvd release would be possible?

Ashley Good: It is disappointing that I can’t share the movie publicly, but I knew the terms when I signed up. I’m sure Stephen King and his team have their reasons.

SKSM: What “good or bad” reviews have you received on your film?

Ashley Good: In the Deathroom hasn’t been screened to anyone outside of the cast and crew yet. We have entered a few non-profit film festivals, but will need to wait for a few more months to see if the film is accepted.

SKSM: Are you a Stephen King fan? If so, which are your favorite works and adaptations.

Ashley Good: Absolutely. My favourite Stephen King story is The Stand. Growing up as a bit of an awkward kid, I spent most of my free time watching horror movies and reading. I still remember getting in trouble in French class because I kept hiding Stephen King novels in my text books and reading them in class instead (Bag of Bones got me detention!).

Ashley Good: No, Mr. King has not watched the movie yet. Actually, I have the DVD in an envelope next to me at this very moment! As soon as I finish this interview I am going to pop it in the mail.

SKSM: Do you have any plans for making more movies based on Stephen King’s stories? If you could pick -at least- one story to shoot, which one would it be and why?

Ashley Good: If any Hollywood bigshots are reading this and are looking for a director for the eventual The Stand remake, just shoot me an email… I’ll work for free if you let me play with the fake blood!

Ashley Good: I am currently working on getting Pity Party (my feature) as much press as I can, while waiting to hear back from the film festivals that it has been entered in. I am also working on my next feature length screenplay, which I am planning to film in 2018/2019.

Ashley Good: Most people are surprised to know that I really liked Entourage.

Ashley Good: Thank you for reaching out to me to complete this interview! You have built a really cool website, and I hope that it starts to get attention that it deserves. Maybe Stephen King’s team will tweet about it?

I don’t think that I have fans quite yet, but maybe I’ll make a few with In the Deathroom! The trailer is on Vimeo is anyone is interested. The link is Vimeo.com/ashleygood

Ashley Good: Yes, I would like to thank everyone on the In the Deathroom team for making this film possible. I hope that everyone that watches it appreciates their work and that they get the attention that they deserve.