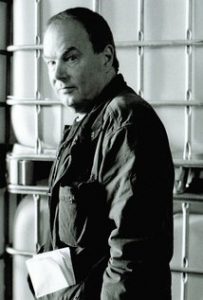 He is the man behind King’s short story Sorry, Right Number.

John Harrison: I am a filmmaker that has written and directed for both movies and television. I started my career back in the ’70’s in the city of pittsburgh where my good friend and mentor, George Romero, was making some of his most memorable films: ‘Martin’,’Dawn of the Dead’, ‘Creepshow’, ‘Day of the Dead’. I had been a fan of George’s since i saw ‘Night of the Living Dead’, and I made it a point to meet him when I moved back to the ‘burgh after living in boston and new york.

I had a small prodcution company at the time with two of my best friends. We did commercials, industrials and (inspired by Romero) we produced our first film, ‘Effects’. Then we teamed up with George on his projects.

I was his assistant director on ‘Creepshow’ and ‘Day of the Dead’. I also did the score for both of those movies and that’s what got me started.

SKSM: One of the 8 Tales from the Darkside episodes was Sorry Right Number, Why was that and why not just an ordinary production without them?

John Harrison: ‘Sorry Right Number’ was Steve’s first original television script. The series producer, Richard Rubinstein, asked me to direct it because Steve knew my work on the other ‘Tales’ I’d done, and because he knew me from ‘Creepshow’.

‘Sorry Right Number’ is one of the favorite ‘Darksides’ I did because it’s more of a psychological suspense tale set in an inimitable Stephen King ordinary family. We had a great cast.

SKSM: When did you make Sorry Right Number? Can you tell me a little about the production? How much did it cost? How long did it take to film it?

John Harrison: ‘Sorry’ was no different than any other ‘Tales from the Darkside’ episode production-wise. The budgets were in the neighborhood of $100,000 for a half hour program, which was even then pretty low budget.

We shot it mostly on the soundstage in Los Angeles where we had made studio in an old mattress factory. We did one day of location shooting which was highly unusual for a darkside episode. We shot it in five days.

It was the last darkside episode I did. I think that was 1985.

SKSM: What do you think of the 2005 version of Sorry Right Number?

John Harrison: I think it is pretty good, although it’s a bit truncated from Stephen’s original story.

SKSM: Was there any funny or special moment when you made the movie(s) that you would like to tell me about?

John Harrison: When I was making ‘Tales From the Darkside, The Movie’, one of the stories was ‘Cat from Hell’, which was a Stephen King story adapted by George Romero. It was my favorite tale in that movie because my cinematographer, Rob Draper, and I designed a very creepy style that I’m still proud of to this day. It involved going back and forth in time while the character ‘Drogan’ tells the hit man why he wants the cat killed. We designed these very cool shots where action would seamlessly continue from past into present using only lighting cues and camera moves instead of special effects.

Rob and I are huge fans of the great italian cinematographer, Vittorio Storaro, and we really went to school on some of his techniques, particularly his use of dimmer board lighting in ‘One from the Heart’.

Interestingly, when it came time for me to do the tv miniseries, dune, I was able to talk Vittorio into doing it with me, and I had great fun telling him how I had stolen his techniques for ‘Cat from Hell’.

SKSM: In 1990 came Tales from the Darkside: The movie. How did this happen?

John Harrison: Producer Richard Rubinstein had wanted to do a movie based on the successful tv series for some time. He was finally able to raise the money independently soon after the series came to an end. It was a perfect way to make the film because we didn’t have any studio interference. Only after we were finished did Richard sell it to Paramount.

I was lucky to be the one he chose to direct it. We shot it in 1990. Did it all on a soundstage in New York except for the mansion in ‘Cat from Hell’ which was a huge estate once owned by the Italian Government as a place for Mussolini.

Had a great cast, full of terrific actors like James Remar, Rae Dawn Chong, Debbie Harry, and some which went on to become even bigger stars like Julianne Moore, Steve Buscemi, Christian Slater.

SKSM: Did you have any personal contact with King during the making of the movies? Has he seen it (and if so, what did he think about it)?

John Harrison: I had very little contact with Steve during production. I think there were some occasional notes back and forth about ‘Cat’.

Steve has a very healthy attitude about film adaptations of his books. His novels and the films made from them are very different creatures. When asked about whether he’s worried filmmakers will ruin his books, he simply points to his bookshelf where all the novels are and says, “no one can ruin my books. they’re right there. exactly as I wrote them.”

As far as I know, he never interferes with filmmakers. Some adaptations turn out great, others not as much.

Fortunately for me, he’s seen ‘Tales’ and liked it.

John Harrison: At the moment, there are no plans for me to do any adaptations of Steve’s work. I spent some months in 2009 developing a miniseries adaptation of “Cell” for the Weinstein Company, but that fell through. (see below).

I love that book and would do anything to revive the project at some point. But I think Steve and his people have other plans at the moment.

SKSM: In 1981 you had a role in George A. Romero “Knightriders”. Stephen King had also a role, Did you meet/spoken him on the set?

John Harrison: One of the great things about working with Romero is his willingness to pull together all the people he knows and gives them opportunities on his projects.

Since I had gone to university to study theater and acting, I auditioned for him when ‘Knightriders’ came up. (I had already done bit parts for him in other films, and had a major role in the film, ‘Effects’, which my partners and I produced.

George was very gracious and gave me the role of Sir Pellinore which allowed me to be on that production from start to finish. A great learning experience.

John Harrison: Producer Richard Rubinstein asked me to be George’s 1st assistant director on that film. I had never done that job before, but again it was a great learning opportunity.

I had been a musician all my life before conentrating on film, so during the shoot George and I would discuss what the music would be like. Originally he intended to use library cues from old 50’s horror and tv shows. But when we got down to it, some of them didn’t sound very good, or they didn’t work well with the film.

I had some musical gear, so I started to improvise themes and cues to ‘Temp’ the movie. George liked them. One thing led to the next, and by the time we were through, I’d scored the movie.

SKSM: On your imdb page is a statement about King’s Cell. What is your role in this production?

John Harrison: At the moment, I’m no longer involved. I developed a tv miniseries adaptation for the Weinstein Company at the beginning of 2009 after they decided not to go forward with it as a movie.

Although Bob Weinstein really liked my take on it, the company didn’t move forward fast enough on setting it up with a network. Their option on the book expired and Steve decided to go a different direction.

I still think it would make a fantastic tv miniseries. There are so many ways to explore that story. It’s got great characters, a really compelling theme, and some of the scariest moments I think Steve’s ever written. Ah well….

John Harrison: Thanks, Bernd. thanks again for the interest.
– John Harrison / Official website