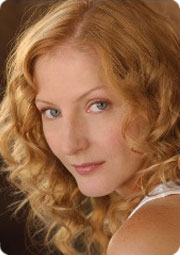 Karla Droege: I have been working in the entertainment field since I was 12 years old. Bitten early by the acting bug, I had my first role as a gingerbread child in a stage production of Hansel and Gretel. After getting a degree in theatre from Lenoir-Rhyne College and working 10 years professionally, I discovered a passion for television and film. Since gravitating toward the camera, some of my favorite projects include “Big Fish” directed by Tim Burton, “America’s Most Wanted,” and hosting for “Gospel Music Channel.” I had leading roles in two independent features that were filmed last year as well as numerous commercials currently airing around the country.

Karla Droege: You know, it’s been awhile, but I believe I saw an audition posting on-line and put myself on tape. I dinstinctly remember shooting the audition because I enlisted a friend of mine with a camera to help me. He has three large dogs, so it was an entertaining comedy of errors to try and get them to stay out of the shot.

Karla Droege: Well, I suppose I stole my thunder on this question by already telling the dog story. I’ve not had a part written directly for me, but I’m certainly open to the idea. Anyone? Spielberg?

Karla Droege: He was great! I didn’t know what to expect having never met him before the shoot. He was so organized and knew exactly the kind of shots, feel and look that he wanted while leaving plenty of room for the actors and crew to add their own creativity. It is so important to have a director driving the car, or else it become impossible for everyone else to do their job.

Karla Droege: I drove up from Atlanta for the shoot, and the evening I was due to leave an ice storm hit Atlanta. But, being hard-headed, I went anyway. While driving, I thought to myself, I have truly lost my mind. Luckily, about 2 hours outside of Atlanta it turned into rain, and it worked out fine.

Karla Droege: No, I send postcards to Brian periodically, but that’s about it.

Karla Droege: I have continued my acting career which has steadily grown since shooting Sorry, Right Number. That has included shooting about half a dozen indie feature films along with two tv shows and multiple commercial and corporate projects.

Karla Droege: I haven’t seen it, nor am I going to download it….and for the bizarre explanation, see the next question.

Karla Droege: To be totally honest, I have no idea. Part of what helps me as an actor is that I have a very vivid imagination. The down side of that is that I am about the biggest wuss when it comes to anything even mildly scary. I’m also a sleepwalker, and let me just say that the two do not go hand in hand. So I have never seen or read anything by Stephen King, except this script. Now, the odd part of all this, is that I have no trouble acting IN scary movies. I’m really not sure why that is, but I’ve just decided not to question.

Karla Droege: Yes, thanks for checking us out and keep your eyes out for me on the big screen in the next few years!