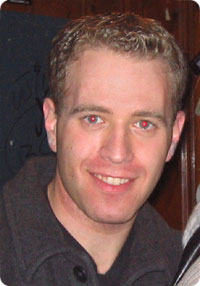 He is the man behind King’s short story Sorry, Right Number.

SKSM: Could you start with telling me a bit about yourself? And what have you done after making The Secret Transit Codes of America’s Highways?

Brian Berkowitz: I was born and raised in New York City. Film has always been a passion of mine. Since Secret Transit Codes I’ve jst been searching for my next film.

SKSM: When did you make Sorry Right Number? Can you tell me a little about the production? How much did it cost? How long did it take to film it?

Brian Berkowitz: Sorry right Number was shot in January 2005. Post-Production was completed inin April 2005 and the film made it’s debut screening on May 4th 2005 at Loews theater in midtown Manhattan

SKSM: How come you picked Sorry Right Number to develop into a movie? What is it in the story that you like so much?

Brian Berkowitz: It’s a very simple story with a clever “sci-fi” twist at the end. Classic Stephen King, how can you go wrong?

SKSM: Did you have seen the 1986 version of Sorry Right Number? If so what do you think about it?

Brian Berkowitz: I have seen it and I think it’s very good for it’s time. I had to make a couple of changes from the original to the script and some characters but other than that I think the 1986 version was done quite well.

Brian Berkowitz: There was a dog on set at one of the houses we rented to shoot in. if you look closely, the dogs shadow can be seen in some shots

Brian Berkowitz: I’m delighted that I can share this film with real Stephen King fans. I’m sure all true fans love this story and now the get a chance to see it on film, 20 years sine the original.

Brian Berkowitz: As far as I know he has not seen it. The only contact I’ve had with Mr. King was securing rights to make the film.

Brian Berkowitz: I’ve done two in the past and as of now I don’t plan on making any more in the near future. I’m am currently writing an original feature so we’ll see where that takes me. Hopefully one day I can direct a Stephen King feature!

Brian Berkowitz: Hope you enjoy the film and I appreciate you comments!