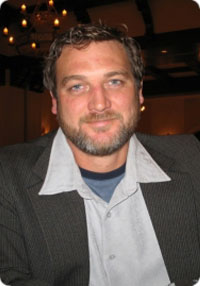 Darrin Stevens: Well, I started my acting career in the ealy 90’s down in Miami, FL. doing theatre, Shakespeare fesivals, performance art projects, and short films for University of Miami film department. Currently I live in Wilmington, NC (also known
as Hollywood East or Wilmywood) where I work as a decorative concrete installer. I am also the Technical Director for a theatre company called Big Dawg Productions and I audition as much as possible for film and television. As well I do some stand-up comedy from time to time and most recently just finished filming the first season of a new police drama podcast called Port City PD (www.portcitypd.com) in which I play Detective Murphy.

Darrin Stevens: I had to audition like everyone else. I had auditioned for AMVF productions on other projects but had
not landed anything with them until this. I read for the lead and one other male supporting role and wound up with the lead role.

Darrin Stevens: Well, if it was written for me I certainly didn’t know anything about.

Darrin Stevens: Working with Brian was somewhat of a welcomed challenge. All directors work differently and at their own pace so the more directors you work with the more rounded and versatile you become as an actor. Brian allowed me to play Bill as I saw fit and then through rehersing would give notes and direction on how he saw it should be played. But he gave me plenty of breathing room and
was easy to get along with.

Darrin Stevens: Nothing out of the ordinary happened that I can recall. However, It was really great working with the crew at AMVF Productions. They are all good people and everyone got along great. Lots of laughs in between takes.

Darrin Stevens: Occasionally I run into Bo Buckley and Eric Holloway. In fact, about a year ago I got to help them film a trailer for a feature length film they are trying to get off the ground called ‘Savage’. I got to play a fireman that gets eaten by bigfoot. Matt Mosher was on that shoot and he also did my most recent headshots. I also run in to Barbara Weetman sometimes.

Darrin Stevens: I worked a few times on NBC’s flop called ‘Surface’ and a few times on WB’s ‘One Tree Hill’. I’ve managed to
work on a few local commercials as well. My biggest highlight has been working on the podcast series Port City PD. Take the time to check out the show online. So far the show has had well over a million downloads and has been seen in over 80 countries. Its really well produced and no one on the internet is producing anything like it. It just got greenlighted for season 2 and I am excited to be
part of it.

Darrin Stevens: Sorry to say I have not. I try not see things if I am going to be playing the same role as someone else. I once played the role of Petruchio in Taming of the Shrew for the Durango Shakespeare Festival and I had rented the movie version
with Richard Burton and Elizabeth Taylor and during performances I had picked up some of Burtons mannerism. I found it difficult to shake those things off and I really wanted role to be more of my own.

Darrin Stevens: I have been a fan of Stephen King since I was a teenager. I have read just about all of his work and
am amazed that he is still able to put out strong, original stories.

Darrin Stevens: Thanks to all who have taken the time to listen to me babble on about myself. Thanks for watching Sorry Right Number and I hope you enjoyed it. And please check out Port City PD at www.portcitypd.com and finally thank you Bernd for asking me to interview, I’ve really enjoyed it.