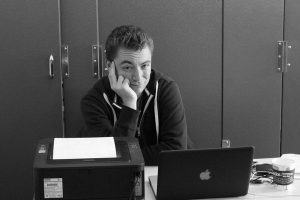 He is the man behind Message from Jerusalem Dollar Baby Film.

Kristian Day: I am a fulltime filmmaker and writer based in Des Moines, Iowa. I mostly work in realityTV and the occasional feature. I write for magazines including Fangoria, Horror Hound, and various newspapers.

SKSM: When did you make Message from Jerusalem? Can you tell me a little about the production? How much did it cost? How long did it take to film it?

Kristian Day: I made Message From Jerusalem after being invited to a Stephen King inspired art show at the now defunct Des Moines art gallery, Finders Creepers. I spent no money on the production because I knew I would never make any money on it. It was more of an experiment than anything else. It was filmed over a period of two months. There was never any type of “real” production timeline. I took the camera while I was on road trips. The locations included Galena, IL (the New England looking town), the legendary American Gothic house (yes the famous house from the Grant Wood painting), and a chapel on the campus on the Drake University Campus.

SKSM: How come you picked Jerusalem’s Lot to develop into a movie? What is it in the story that you like so much?

Kristian Day: Jerusalem’s Lot was one of my favorite stories from the Night Shift book. I remember reading it and visions would pop in my head of a dark and desolate snowy night. It predates 30 Days Of Night by a few decades but the atmosphere is very similar.

SKSM: Are you Stephen King fan? If so, which are your favorite works and adaptations?

Kristian Day: Yes and no. I loved books like Night Shift, Carrie, Salem’s Lot, and The Shinning. I don’t believe he changed as a writer in anyway. I changed as a reader. As far as film adaptations, I loved Salem’s Lot and Graveyard Shift.

Kristian Day: I think it was probably just from some late night web surfing. I wish I could say it was something more exciting but that was really all it was.

Kristian Day: Years after filming was completed, I became friends with the woman who was living in the house (rent for the place is only $250 per month). I was having some wine with her in the kitchen on a Friday afternoon and told her what I had shot a couple years back. I showed her the film and I was never invited back.

Kristian Day: The film screened at the Stephen King art show at Finders Creepers in Des Moines on January 22nd 2011. It has never screened at a festival since (and most likely won’t).

SKSM: How does it feel that all the King fans out there can’t see your movie? Do you think that will change in the future? Maybe a internet/dvd release would be possible?

Kristian Day: The film is available online to view for free on my website http://kristianday.com/film/shorts-2/message-from-jerusalem-2011/

Kristian Day: Most people have enjoyed it… especially on some type of drug.

Kristian Day: No I have never met or spoken to him.

Kristian Day: I would be interested in making a standard feature based on Jerusalem’s Lot. That story has always stuck in my mind. I love stories that take place in desolate settings create feelings of doom and hopelessness. I am really not a dark person but I love taking characters to the edge. The last movie I saw that did that was Martyrs.

Kristian Day: I worked on season 19 of The Bachelor this past fall and just completed an episode of the show Intervention. I am working on a feature at the end of February called Up On The Wooftop. It is a kids movie about a talking dog who saves Christmas.

Kristian Day: For those who have seen it and have become interested in this film. Thank you.