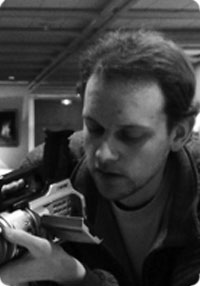 He is the man behind King’s short story Suppr..

Nicolas Heurtel: I’m a “little” frenchie of 27 years old and the Cinema is a great passion to me… so I gave up my studies in architecture to study film making at the university 3 years ago. This is where I met some good friends, and we finaly created a little team, and we made all of ours movies together. We made about 6 short, all amaters, “suppr.” being the last on the list, made in June 2005. My first “professionnal” short is in project, I’m the script and director and I just have to find… some money !

SKSM: How come you picked Wordprocessor of the Gods(Suppr.) to develop into a movie? What is it in the story that you like so much?

Nicolas Heurtel: The first reason is that I’m a great fan of SK since I’m 13 ! The first book of SK I read was “The long walk” and it really impressed me, I never read something like that before. Since then, I read all of his books. So, I naturally feel the need to adapt one of his novel, but few are easy to adapt, for amaters like us… “Wordprocessor of gods” is a part of those who were conceivable, in one condition, rewrite the story to create an “evil” character, a twin evil which could come right from “Secret window” and so create some difficulty, cause without difficulty, there’s no story to tell.

The second reason is that we hadn’t much time to do it, we all were very tired by our previous movie which took us 2 months (a 45 minutes movie !) so it was a kind of recreation to make a “little” movie of 15 minutes ^^ And it’s very interresting to work on the adaptation of an existing work.

SKSM: When did you make Wordprocessor of the Gods(Suppr.)? Can you tell me a little about the production? How much did it cost? How long did it take to film it?

Nicolas Heurtel: It’s a complete non-professional project, because we were students. A member of the team wrote a first version of the script… and the four of us gave our ideas. After that, I modified this first version, to make everyone pleased, including our teacher, cause it was at first place a work for university! The second part was to find unpaid actors. As we were in Paris, there are several ways: theatre schools, associations which give some catalogs of professionals and non professional actors (with resume and pictures of them). So we took an afternoon to note some names and give some calls to know if they were interested with the project. We were lucky, we found pretty quickly, so in 2 or 3 weeks, we had a script and actors we casted.

After that, we transformed a friend’s cellar into an office. Another member of the group made the machine. The shooting take 2 days : 1 in the office, an other for the scene in the kitchen and the sitting room, in the house of an other friend. We had to do it very quickly. We took an afternoon to record the off-voices at the university.

We then did the cutting and special effects in 2 or 3 weeks (cause we had exams and class, we couldn’t work on it very often).

The movie didn’t cost anything, except some pizzas !

Nicolas Heurtel: There are always funny moments, but as we haven’t much time and lot to do, we try to stay serious during the shooting! In fact, there was something rather funny… In the basic script, the man has a son (as in the original novel) but we finished the shooting day with this boy and it was too late, so the boy couldn’t come. Finally, after some phone calls, we found a girl to replace him, the sister of a friend of somebody in the team (rather complicated eh?)

Something else: the journalist we can see at TV is a real journalist but also the most famous of the TV news presenter in France, he gathered more the half of the TV viewers! We got something like 3 minutes to shoot with him! We were really exited he was okay to participate.

SKSM: How does it feel that all the King fans out there can see your movie? Do you think that will change in the future? Maybe a video/dvd release would be possible?

Nicolas Heurtel: It’s very pleasant to see that ideas, drawings, texts and movies can freely circulate… and that they have a life on the Internet! I was surprised when you contacted me to ask some questions! I really happy to share what I do and what I love with other people… this is generaly the reason to make cinema ^^

And to have a beautiful copy of the movie, it will take some time but we’ll do it… we are rewriting subtitles and after that we should be able to burn it on a DVD or send it directly on the Internet.

Nicolas Heurtel: No! I would be pretty ashamed to show him this movie cause the script is too much confuse! And this is more a tribute to King than an adaptation (for instance in the drawing of the credits at the beginning of the film, we can read “Castle Rock” and see “Christine” in front of “Le bazaar des rêves” (NEEDFUL THINGS)… or the complete collection of King’s books on the shelves of writer’s shelves…) and I don’t think that would interest him… but if you know him personally, just tell him I’m very interested to adapt some of his books!!!

Nicolas Heurtel: No, for the moment, I don’t have other projects, cause, like I said earlier, it’s not easy to adapt King, specially without money ! But sure, there are stories I would like to adapt, like “The long walk”… I read it regularly and really think it could be a great movie !

Nicolas Heurtel: I just want to thank you for the interest you showed for my work. And, hum… Cheers to Stephen King !